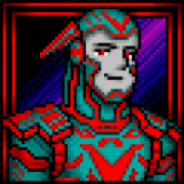 Auric
July 2016 in Starship Horizons
I'm just curious... How many Alpha players do we have here? And how has your experience been?